The 5th International Breast Cancer Paddler’s Commission (IBCPC) Dragon Boat Festival was held in Florence, Italy at Cascine Park on July 7 and 8, 2018.  The IBCPC is an international organization whose mandate is to encourage the establishment of breast cancer dragon boat teams, within the framework of participation and inclusiveness. Currently, there are 213 breast cancer survivor dragon boat teams in 23 countries that are members of the IBCPC.  Every four years, the IBCPC hosts a participatory dragon boat festival, welcoming breast cancer teams from around the world to paddle and celebrate survivorship.  This year, there were approximately 4000 breast cancer survivors representing more than 130 teams from 17 different countries. 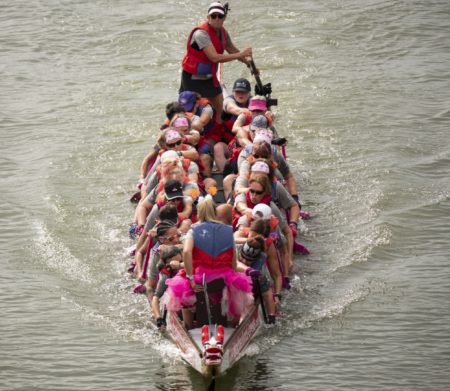 One of those 130 teams was the AZDBA’s very own Phoenix Desert Dragons. Over the past 2 years, the Double D’s have been tirelessly fundraising to attend this remarkable event. The team raised close to $25,000 covering the cost of the team’s festival registration and event accommodations. Overall, the team had 25 members and 9 supporters to represent Arizona—as well as a few non-attending supporters that went for the sights.

The event was unlike any festival the Double D’s had ever attended. Aside from the beauty of Florence, the experiences were unparalleled. Prior to the races, a group of paddlers and supporters had the unique opportunity to paddle under the Ponte Vecchio (a treat rarely given to even the locals). Likewise, a “Parade of Nations” marched through the heart of the city—banners, flags, chants, and costumes—each of the 130 teams showed their spirit to the locals and tourists as they wound through the ancient cobblestone streets to the Fountain of Neptune. 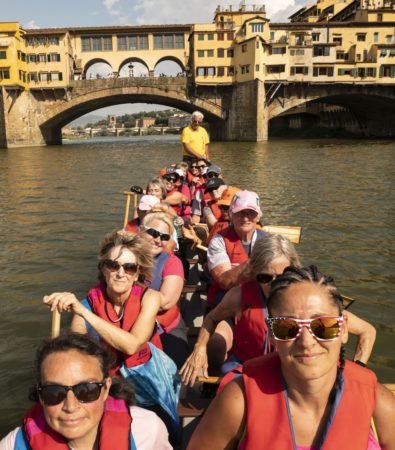 Two days of races followed, with each team racing twice per day and planting reassessed after each race.  For the Double D’s, this was the first time they had participated in a festival of this magnitude. Though it was a participatory event with all participants receiving a medal, the Double D’s went there to race. Going into the first race, there was much excitement, nervousness, and anticipation in the boat.  They worked hard just to make the trip a reality, but they trained even harder. Still the team wasn’t sure where they would fall among all of the other teams- they had set their goals high and hoped to place somewhere in the middle. Much to their own amazement and surprise, the team kicked ass. They consistently landed in the top 1/3 of all teams represented with some of the fastest race times in the history of the team. What an accomplishment!

A special race—the Sandy Smith Global Race—was held to celebrate the life of Sandy Smith. Sandy was a member of the very first breast cancer dragon boat team, Abreast in a Boat. Each of the 130 teams designated one paddler from their team to participate in this special race. Paddler Julie Hoff was given the honor of representing the Double D’s in this race.

With paddlers and supporters wearing the official festival jersey, a brilliant sea of pink lined the riverbanks for the culminating event, the flower ceremony. This ceremony is a tradition at festivals where breast cancer survivor teams are present–to celebrate the lives of those that have survived cancer, to give hope to those that continue to battle, and to honor those that have lost their lives to breast cancer.

The Double D’s are full of gratitude- for having the honor and opportunity to participate in this event. They are beaming with pride for their amazing accomplishments and now have a deeper love and passion for the sport of dragon boating. They have a stronger belief in themselves as individuals and as a team. More than that, they realize that they are never truly alone in this journey and that breast cancer will never define who they are and what they are capable of.